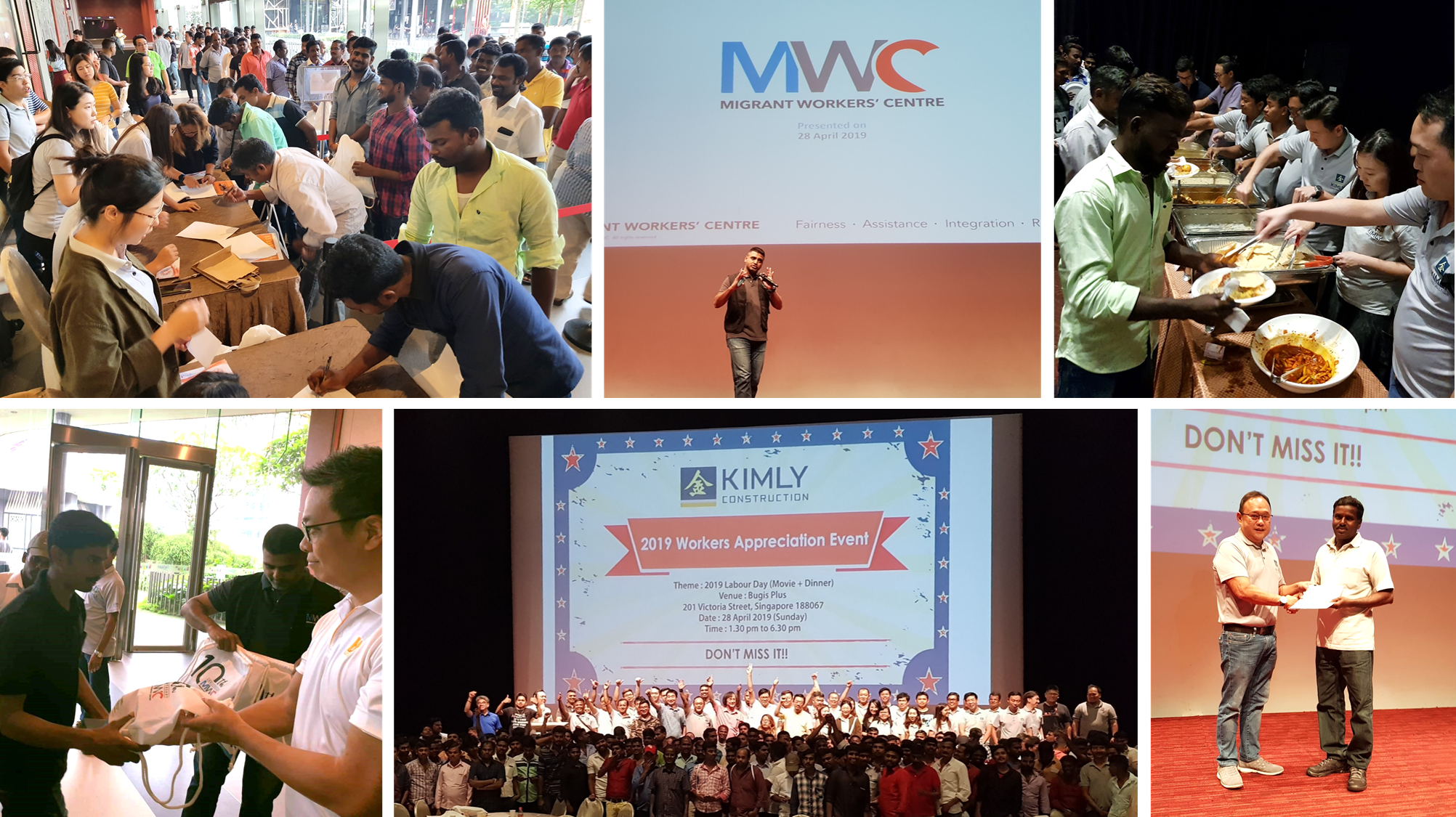 In conjunction with Labour Day, Kimly Construction has organised the Workers’ Appreciation Event on 28 April 2019, at Bugis Plus – Filmgarde & Joyden Hall. This event is part of the Corporate Social Responsibility (CSR) initiative, where Kimly aims to promote the welfare and wellbeing of our workers by showing appreciation to them for their services and contributions for the past year.

This is the first time Kimly has collaborated with the National Trades Union Congress’s  Building Construction And Timber Industries Employee Union (NTUC-BATU)1 and Migrant Workers’ Centre (MWC)2 in such event. Mr. Joshua Sham, Deputy Director Operations from MWC, took the stage to share with the workers on MWC’s mission in championing fair employment practices and the well-being of migrant workers in Singapore. Workers were able to find out more about the various forms of support and assistance which are available to them.

The program lineup was specially arranged for the workers, where they get to enjoy a movie screening and luxurious buffet spread. Each worker also received a complimentary goodie bag from the Labour Movement NTUC-BATU and MWC, as well as vouchers from the company.

At the annual Workers Award ceremony, several workers received certificates in recognition of valuable contribution to Kimly: these workers have displayed positive behaviour, ensuring both good safety and quality standards at workplace are achieved.

The company hopes that by identifying and rewarding these exemplary workers, that they may serve as a goal for others to aspire to, thereabout bringing a shift towards a safety and quality work culture and mindset.

Kimly would also like to take this opportunity to thank NTUC BATU and MWC for joining this event.

1 National Trades Union Congress (NTUC) – Building Construction And Timber Industries Employee Union (BATU) is a one of the NTUC-affiliated unions and associations, representing employees in the building, property management, construction, cleaning and timber industries. Their vision is to promote good industrial relations between members and their employers; to improve the working conditions of members or enhance their economic and social status; and to achieve the raising of productivity for the benefit of members, their employers and the economy of Singapore.

2 Migrant Workers’ Centre (MWC) is a bipartite initiative of the National Trades Union Congress (NTUC) and the Singapore National Employers’ Federation (SNEF). The MWC is a non-government organisation whose mission is to champion fair employment practices and the well-being of migrant workers in Singapore.